Today's commit has a number of new node types. And pictures!

The simplest imaginable metronome. It just makes a tick on every beat (if playback is running). But you can select the sample that it should play. The audio is not sent directly to your speakers, you have to wire it up just like any other node. 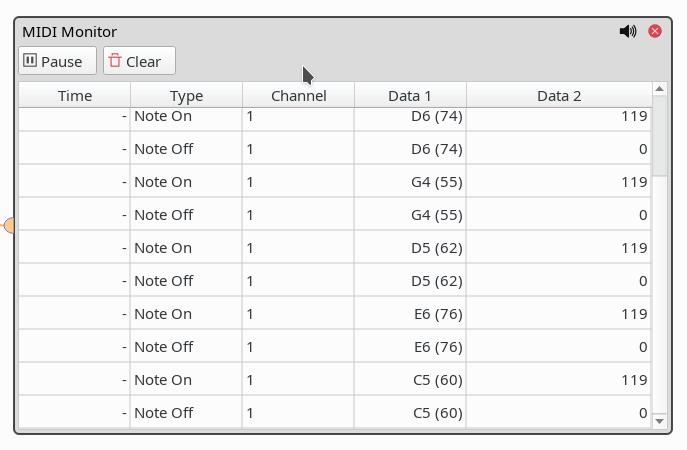 The MIDI Monitor just displays a list of the MIDI events that it receives on its input port. Inspired by KMidimon, but much simpler. I mostly wanted it for debugging of other MIDI nodes. 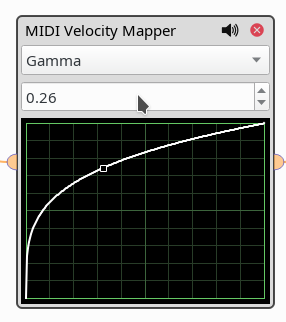 The MIDI Velocity Mapper takes a stream of MIDI events, tweaks the velocity of noteon events (other MIDI events are left untouched) and then just passes them through to its output port.

The main motivation is the little AKAI APC Key 25 MIDI controller, which I have on my desk and sometimes use to feed MIDI data into noisicaä (or any other audio software). It's nice, because it's small and always in arms reach, if I want to doodle around. But the keys are IMHO not very good. They feel pretty cheap and I have to hit them very hard to get even a medium velocity out of it. Perhaps that's ok for professional musicians, or when you're on stage and pumped up with adrenaline. But for a bloody amateur like me, who has trouble even hitting the right keys, that makes it very hard to use. Putting more energy into my fingers just reduces the precision and I keep hitting multiple keys at the same time. The Velocity Mapper basically allows me to adjust the sensitivity of the keyboard. 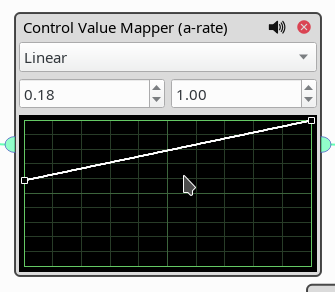 The transfer function, which I implemented for the MIDI Velocity Mapper, was implemented in a way, which is easy to reuse elsewhere. So I just added another node, which applies such a function to an a-rate control value.

"Fixed value:" As the name suggests, the output is always a fixed value. Not very useful for control values, but it makes more sense for the MIDI Velocity Mapper, where you might want to just ignore the incoming velocities.

"Gamma:" This uses the same function as the "Gamma Correction" known in image processing (or your monitor settings). Basically brightens or darkens a signal, while still maintaining the full value range. 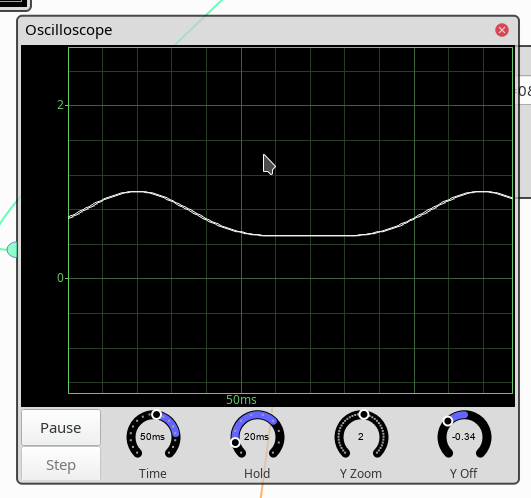 This should mostly work like a real oscilloscope. I think. Because I never used one.

I felt the need to add this one, because while testing out the Control Value Mapper something "did not sound right". But without being able to visualize the signals, I couldn't tell what the problem was. It turned out that Csound's lfo opcode does not work as I expected. The manual makes it look like it can produce both k- and a-rate signals. But it turns out that even when using it with a-rate output, the actual value is only computed at k-rate. So what I heard was basically an LFO with a super low sample rate.

Currently you can only feed a-rate control values into it.

While working on those new nodes, it became quite annoying that ports have different types that you can't easily connect. E.g. plugins generally use k-rate control values for their controls, whereas my builtin nodes prefer a-rate control values. So if I have an LFO producing an a-rate output, I can't use it directly to feed some control of a plugin. Or the Oscilloscope should also be able to display audio data. And so on.

In some cases it can make sense to allow connections between ports with different types. A k-rate control output could just be interpolated to feed into an a-rate control input. An audio output can feed directly into an a-rate control port (not the other way around, because control values can be in any range, and you really don't want to feed that into your amp). So noisicaä could do some auto-conversion has needed.

Or nodes could be able to accept different connections to their ports. E.g. the Oscilloscope would declare that its input port can accept k-rate and a-rate control values as well as audio signals. And then just process that input appropriately. But that capability would be limited to builtin nodes, because plugin don't know how to do that.

So that's probably what I'm going to work on next.